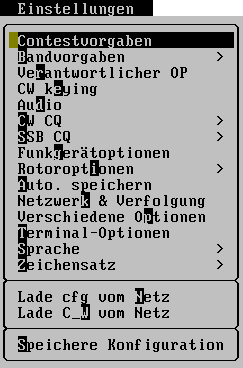 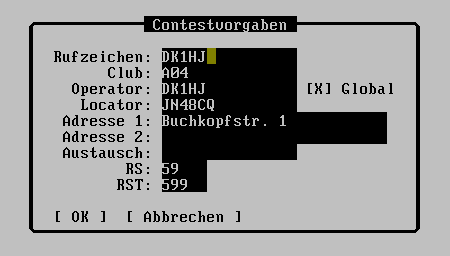 There is possible to set these items in this menu: callsign in contest, club callsign (use only if you can export contest log in EDI format), locator (6 characters), contest QTH (is equal items PAdr1 and PAdr2 in EDI, Optional Exchange and standard proposed reports for SSB and CW. 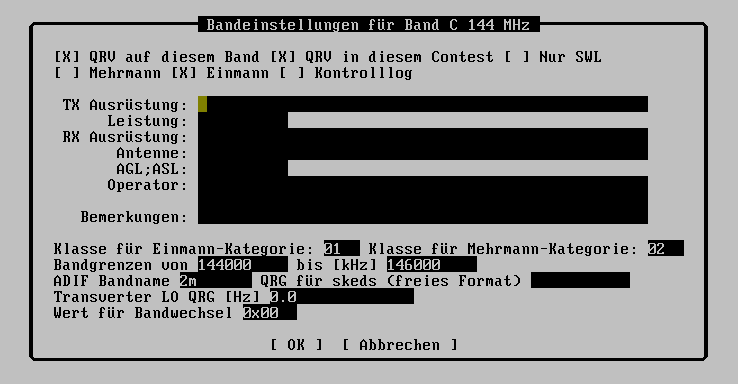 This submenu contains setting of all bands. Active bands (QRV is checked) are separated from other bands. You can take away bands which are never used (as 220MHz in Europe).

You can enter single band setting by pressing ENTER key. Item `QRV on this band' is usually set for all bands where are permit transmittes.

This setting is the only one which must be set. Other items are better set here too but it isn't necessary.

QRV setting in this contest isn't effect on this place. Category can be one of Multi/Single/Check.

TX and RX Equip settings contains description of equipments. Power is written with units. ASL and AGL means a height between antenna and sea/ground. Inserted values are in meters, delimiter is semicolon.

Fill operator's callsigns into Operators field delimitely by semicolon. It is possible to fill it by Fill operators in menu Contest.

Remark field is assigned for remarks to contest commitee.

Single/Multi categories are categories valid (probably) only in Czech republic. They are used mostly for EDI files naming.

Band boundaries are entered in kilohertz. At this time they are used for DX-cluster spot filtration.

QRG for skeds is initial frequency entered by operator to inform other operators about clean/CQ frequency on which they should take skeds. Format is not limited, you can use any string like ".120" etc.

Transverter's LO QRG is frequency which tucnak adds to frequency read from transceiver's CAT and result shows on the screen:

Note some radios support transceiver mode for example radio is tuned on 14 MHz, CAT reports also 14 MHz but transceiver's display shows 144 MHz. LO frequency must be computed by operator, you can use Fix QRG in Edit menu.

This is local frequency for one band. Normally enter 0 to use Global LO frequency.

There are set information of responsible operator for communication with contest commitee in this dialogue. All items are in free format and don't need commentary.

Since version 2.0 Tucnak does not use the external program 'cwdaemon' for keying and transmitting CW. Its functions are included in Tucnak.

Initial speed says keying speed in WPM after program start. You can change it using PageUp or PageDown keys.

Weighting - changes ratio of mark and space in CW.

WPM range describes the speed that can be set with PageUp/PageDown keys. Minimal WPM is also used for Winkey - it can handle only 31 speed steps. Normally minimal speed is set to 10 WPM which means winkey range 10-41 WPM. If you need for example 50 WPM, set minimal WPM to at least 19.

PTT lead in - (experimental feature) Tucnak turns on PTT some time before CW to key on TRX and PA's to prevent "eating" of begin of code. It also allows the TX chain to stabilise before sending. Suggest 100 -> 250 ms.

Fast initialisation means that Tucnak doesn't wait for Winkey initialisation. It can be used mostly for winkey2 which is commonly supplied from USB. It has no effect for other version-depending commands (buttons), tucnak reads winkey version.

Use speed pot/use buttons - doesn't need comment. Normally is no reason to turn they off.

Record traffic switches on/off recording band activity on receiving. If this option isn't active then all next options are irrelevant. To prevent consuming of all free space, use options Max. record duration and Minimal disk free space.

PCM coding is suitable for conversion to other formats (MP3, Ogg). GSM coding has low size. One minute of recording have size about 130 kB of disk space. That is less then 200 MB for 24 hours. This coding doesn't have to supported by your favourite player! GSM format replay for example mplayer (with codec) or sndfile-play distributed with libsndfile.

Option Channels sets number of sound channels. Set it to 1 (mono). You can set it to 2 or 4 it depends on your sound card capability.

Sample rate sets the number of sample per second. `CD' quality has value 44100. This value is needless for radio activity. It's recommended to lower value to half (22050) or quarter (11025) because some programs or sound cards can't work with other values.

Playback volume provides possibility to set playback volume for SSB CQ. Enter -1 to disable this feature. Common valid volumes are 0 to 100 but can be different if you use some special hardware with fancy cost-down.

Note in versions prior 2.26 is bug that doesn't allow to load negative value from rc file. As workaround you can try to enter invalid mixer device.

Template for recorded filename is template for naming recording files. Description of possible macros you can find in section CQ macros.

Period time is maximal amount of time for holding samples in card buffer for capture. Rasonable values are in hundreds (tenth of second).

Capture source button shows submnenu for capture. In menu are all detected sources on specified soundcard.

Max. num of fragments tells number of buffer fragment which can be holded in buffer. If you have problems with recording or witdh transition RX -> TX, try to set to 4 or similar small number. Then check recorded files for buffer underruns.

The list of all CW texts are showed after selecting this item. There is showed the key for running the message in brakes. Character `R' means that the message is repeated (CQ). Also is showing start of text.

There are these items in dialoque for setting CQ:

text of CQ. You can use plain text and macros

speed is normally undefined but you can define speed only for this CQ (f.e. for fast 73)

repeat CQ will be repeated until you press ESC, TAB or other CQ key

allow if... allows to run message if there is any macro undefined. Typically you don't want to give empty string if you have no callsign entered.

filename - file which is played as CQ. You can use macros f.e. /home/user/tucnak/cq/$MC_$O.wav to have multiple files for more callsign and more operators. Some audio output devices can have limitations to the audio format - samplerate, channels.

repeat and delay has same effect as in previous chapter

It's possible to define macros in texts of CW CQ and in name of SSB CQ file. Macros are case insensitive.

You can also use case sensitive macros from strftime(3) for example:

For others use command:

Macros has not effect in all context.

Tucnak uses hamlib for accessing rig (transceiver) via CAT interface. You can use probably any interface which is working with other programs. Good helper is HB9DRV's guide to HRD. Or you can build one of my RIG interfaces.

Device device where the interface is connected. Typically /dev/ttyS0, /dev/ttyUSB0

Model model of rig. It is number defined by hamlib. You can obtain it by running command rigctl -l or you can use:

Choose Press button to show menu. In the first level you will choose manufacturer, in second level rig model. Model number is written to the previous field.

CIV address address of rig if you have more Icom radios connected via one interface. Enter 0 for default address.

Freq. shift SSB->CW some old radios (Icom, Kenwood) shifts frequency when changing mode SSB <--> CW. If you call CQ on SSB and someone calls you in CW, you must switch to CW and tune for about 800Hz up. Tucnak can compensate this shift when you use Alt+M to switch mode.

Transverter's LO QRG is frequency which tucnak adds to frequency read from transceiver's CAT and result shows on the screen:

Note some radios support transceiver mode for example radio is tuned on 14 MHz, CAT reports also 14 MHz but transceiver's display shows 144 MHz. LO frequency must be computed by operator, you can use Fix QRG in Edit menu. This is global LO freq, if you use more transceivers, you can set more frequencies in Band defaults menu.

It sets and saves parameters of QSO to disk. Option `Save to disk after QSO' is recommended set to 1 to save all reports. Fsync option immediately saves QSOs from cache to disk.

Other items are ignored.

Ignore interfaces - list of network interfaces which would be ignored when searching for more instances of Tucnak on the network (transmit broadcasts) as connect to Internet, public IP address from provider, AX.25 interface. The delimiter between interfaces is space character. Broadcasts loads slow nets.

Ignore networks - the purpose this option is the same as Ignore interface option. You can determinate subnet address.

Announce to nets - it's an inverse function of previous options. There is specification of IP address where have been sending broadcasts in this option. The routers usually have disabled forward broadcastings.

Log lines are last lines of tucnak's screen on which tucnak writes informations for users.

Starting band Band character (f.e. C=144 MHz) of band, which will be activated after contest open.

Double font for very-high-resolution displays and bad eyes - fonts are resized from usual 9x16 to 18x32 pixels. It is not very usable but on IARU VHF 2008 I had nothing to do so I've imlpemented it.

Slash key Slash key on some national keyboards is not easily accessible (only with shift). Here you can remap it to any other character. Use with care! 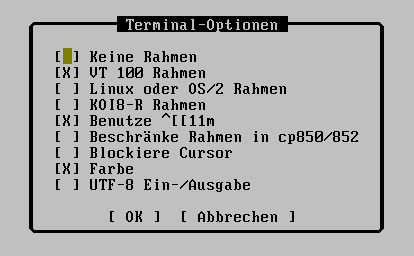 These options come from links browser so I'm not able to tell what they exactly mean. Try to make some experiments or look at source code :-)

Set language of Tucnak's GUI. I think English is very good for contest log but some people like to have their mother tongue set.

This menu is used for setting characteristic of terminal as window frames. It's a legacy of links (as above), I don't have detailed knowledge about these options.

It shows addresses of all Tucnaks on the local network. If one is selected you will read his complete configuration (tucnakrc).

It loads complete C_W database from selected Tucnak and saves it to ~/tucnak/tucnakcw. In database are saved two newest locators for each callsign.